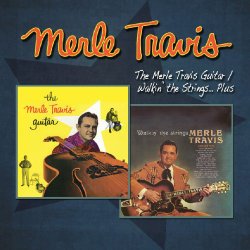 For the first time on one CD Raven presents two original, classic albums by MERLE TRAVIS: The Merle Travis Guitar and Walkin' the Strings. One of the greatest multi-talented artists in the history of Country and Western, Travis was born in Kentucky (1917) and began recording for Capitol in the 1940s. a singer and songwriter of major proportions ('Sixteen Tons', 'Smoke, Smoke, Smoke', 'No Vacancy', 'Cincinnati Lou') he was also a guitar stylist of monumental influence (Chet Atkins, among others). with a sophisticated and complex finger picking style and rich, expressive tone his guitar playing became known as the "Travis Style". The "Travis Style" incorporated country, folk, blues and jazz elements and its impact cannot be under estimated. The Merle Travis Guitar highlights his playing on the likes of 'Blue Smoke', 'Saturday Night Shuffle', 'The Memphis Blues' and 'Rockabye Rag'. Walkin' the Strings includes some of his best-known and best-loved music, serving to illustrate the versatility and originality that have always made Merle a truly great performer: 'Walkin' the Strings', 'My Old Kentucky Home', 'Cannon Ball Stomp', 'Travis Trot'. with five bonus tracks taken from singles, including one of his biggest hits 'So Round, So Firm, So Fully Packed'. with superb quality audio, detailed liner notes, color booklet, 39 tracks and 77 minutes of music.