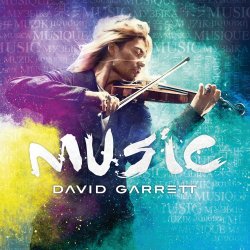 When David Garrett wanted a title for his new album, he came straight to the point and called it Music. A former child prodigy of the classical world who signed to Deutsche Grammophon when he was only 13, he now provokes Garrett-mania among hordes of international fans with his spectacular fusions of rock and pop with symphonic or baroque traditions. To him, it's all music and all equally valid. 'I never stopped playing classical music,' he points out. 'But when you become really accomplished on the violin, you can literally do anything. It's just a matter of what you really want to do with music.'On the new album, David bridges the gap between classical, pop, rock, and R&B covering everything from Coldplay's 'Viva La Vida' to Justin Timberlake's 'Cry Me A River' to classical favorites Beethoven's 'Scherzo' and Clementi's 'Sonatina.' The US version of the album also features an exclusive new track, 'Bring Me To Life' featuring Syd Duran.