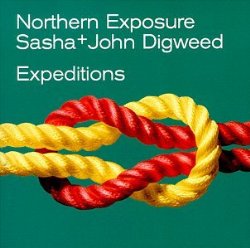 The latest in the Northern Exposure series of trance-techno journeys undertaken by two of the most respected DJs in the world, Expeditions finds Sasha and John Digweed fashioning a set from some fine underground cuts. The disc carries the atmosphere of Jean Michel Jarre while maintaining the pace and energy of Orbital. Using Breeder's "Tyrantanic" as their warm-up, the dynamic duo seamlessly utilize simple techno beats with the likes of Jayn Hanna's "The Light," pumping after-hours house such as Mono Culture's "Free," and deliciously simple trance as in Red Devil's "Gamelan." Maintaining the traditions of previous Northern Exposure sets, there are two different discs for slightly different moods--the first more of a late-night soundtrack, the latter a blue-sky marathon--but both work equally well sequentially or separately. Expeditions is a dynamically balanced dance journey that takes you through many of the vistas electronica and DJ culture has to offer. No phrasebook is necessary. --Steffan Chirazi

Do you want ot get the Northern Exposure : Expeditions?

Rivers In The Wasteland
In a Space Outta Sound
Through Children’s Eyes: Little-Folk Songs for Adults
Backatown
My Rifle, My Pony & Me: Movie & TV Soundtracks
Sex Pistols – The Great Rock ‘n’ Roll Swindle