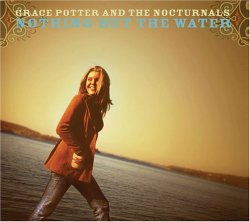 The Vermont-based group is led by twenty-two year old phenom Potter, whose vocals have drawn comparisons to the likes Bonnie Raitt, Norah Jones and Janis Joplin. Together with bandmates Scott Tournet (guitar/slide guitar), Matthew Burr drums/percussion), and Bryan Dondero upright/electric bass), Potter has captivated audiences nationwide with a Hammond B-3 fueled sound that blends roots rock, funky blues and gospel to thrilling effect. After a recent performance at the Boston Music Awards, The Boston Globe gushed, the act that stole the show was Grace Potter and the Nocturnals. She began by singing acappella gospel tune, then played some searing organ licks when the band cut in. The room was transfixed. Since forming in Canton, New York in 2002, Grace Potter and the Nocturnals have been remarkably self sufficient, booking and promoting their own tours, while independently releasing albums. In 2004, they self released and sold over 15,000 copies of scorching debut disc, ORIGINAL SOUL. The album drew rave reviews from newspapers and magazines nationwide and the quartet built a loyal following through non-stop touring. They amplified their sound and fan base with powerful soul charged sophomore album NOTHING BUT THE WATER. The band has been on the road since its May, '05 release, tearing up venues on tours with artists such as Dave Matthews Band, Trey Anastasio, Taj Mahal and the John Butler Trio.