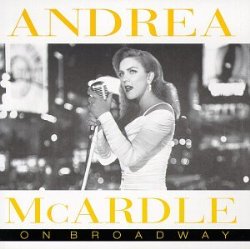 The wide range of show tunes included on 1995's On Broadway makes it feel somewhat like an audition tape. After all, its star, Andrea McArdle, hadn't headlined a new show since the age of 12, and this seems to be an effort to show that she can handle a number of different roles. Does that mean it's bad listening? Of course not. McArdle (and husband/producer Edd Kalehoff) proves her point that she is one of Broadway's greatest and most versatile voices of the last quarter century and is still going strong at the ripe old age of 30. Here she sings numbers from the various places she's been over the years, including State Fair, Les Misérables, and, of course, Annie, as well as her wish list--Evita, Oliver! and Meet Me in St. Louis (it's tantalizing to imagine her in the Judy Garland role). Anyone who had tried to file Andrea McArdle under the category of "Whatever happened to..." should pick up this album and enjoy. --David Horiuchi

Do you want ot get the On Broadway?