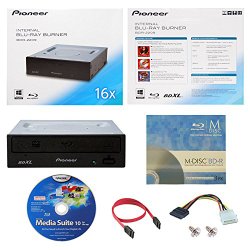 "Want the fastest Blu-ray burner currently in the market? Looking for Pioneer's most powerful and full featured drive? Don't want to settle for less than the best? Then the BDR-2209 is the perfect drive for you. The BDR-2209 is an internal SATA Blu-ray, DVD, and CD burner that supports the BDXL format, which has available triple layer (TL) and quad layer (QL) Blu-ray media1. Need software to tackle all your playback, editing, authoring and burning needs? The BDR-2209 is bundled with CyberLink Media Suite 10, which includes PowerDVDTM 10, PowerDirector® 10, and Power2Go® 7 and supports Windows 8." Running out of hard drive space? Don't trust a hard drive with your irreplaceable files? With triple layer and quad layer BDXL media, you can store up to 128GB on a single disc. That's the equivalent of 27 single layer DVD discs or 15 dual layer DVD discs. And with up to 16x2 write speeds on BD-R media, you can do it fast. The BDR-2209 also has features such as PowerReadTM, Auto Quiet mode, PureRead2, and QuickPlay. PowerRead3 can provide smoother movie playback when a disc has fingerprints or minor surface scratches. Auto Quiet mode intelligently adjusts the disc rotation speed to reduce noise (useful while watching movies or listening to music), PureRead automatically adjusts drive parameters to minimize sound glitches during music playback, and QuickPlay reduces the time between inserting a disc and that disc being ready. For movies on DVD and Blu-ray, the disc is ready faster than with previous Pioneer drives.