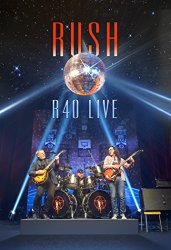 All roads have led to this. Forty-one years in the making, the R40 Live tour took a very real journey back through time. Beginning with the grand design: a state-of-the-art stage set that pivots, rolls and dives, and brings Clockwork Angels in to bombastic, colorful life before marching stridently back in time (through theatre stages, a panoply of band and fan shots, the accrued memories of a life spent playing live) to a mocked-up school gym and the band playing there; a solitary bass amp set on the chair behind Geddy Lee, a mirror ball spiraling crazily above, casting thin rods of light like a light rain across the crowd, "Working Man" coming to a shuddering halt as the band's beginning becomes their end. Rush recorded and filmed R40 LIVE over two sold-out shows in the band s hometown of Toronto on June 17 & 19, 2015 in the middle of what was rumored to be their last grand-scale tour. The set list includes classics "Tom Sawyer," "The Spirit of Radio" and "2112" as well as rarities "Xanadu," "Jacob's Ladder" "Lakeside Park," not to mention, for the first time ever live, Losing It. R40 LIVE is the ultimate career-spanning live retrospective of Geddy Lee, Alex Lifeson and Neil Peart; a celebration of 40+ years of epic rock. Captured with 14 cameras in full HD quality, the concert is presented in feature film style with true Dolby stereo, 5.1 surround sound, and DTS HD surround sound.Set One1. The World is .. The World is ...2. The Anarchist3. Headlong Flight4. Far Cry5. The Main Monkey Business6. How It Is7. Animate8. Roll the Bones9. Between the Wheels10. Losing It (with Ben Mink)11. SubdivisionsSet Two12. No Country for Old Hens13. Tom Sawyer14. YYZ15. The Spirit of Radio16. Natural Science17. Jacob's Ladder18. Hemispheres: Prelude19. Cygnus X-1/The Story So Far (drum solo)20. Closer to the Heart21. Xanadu22. 2112Encore23. Mel's Rockpile (with Eugene Levy)24. Lakeside Park/Anthem25. What You re Doing/Working Man26. Exit Stage LeftBonusOne Little VictoryDistant Early WarningRed Barchetta