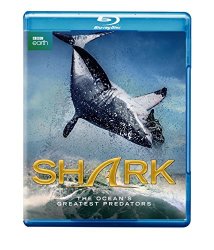 Stealthy hunters. Fearless predators. Brilliant survivors. The oceans s greatest creatures have been shrouded by mystery and fear until now. You may have seen shark films, but you ve never seen one like this. The most ambitious shark film ever made is a stunning high-definition spectacle that captures astounding jaw-dropping footage. Witness Great Whites hunting for seals filmed from underwater, in the air and in slow motion. See hundreds of Blacktips work together to corral bait-balls of fish. Watch how the Wobbegong s lightning-fast reactions ambush its prey. Get a rare look at the mangrove nurseries of Lemon sharks. You ll also view a live shark birth and even a real land shark. Revolutionary technology is about to share the ultimate look at sharks. Sit back and relax...if you can.