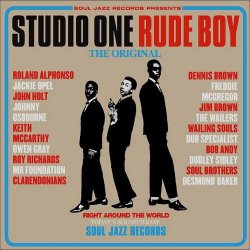 The latest Studio One release to be released on Soul Jazz Records features another fine selection of classic artists from the foundation label of Reggae. Rude Boys are synonymous with Jamaican Dancehall culture from the present day going back to the very early days of Sir Coxsone Dodd and Duke Reid's first sound-clashes in Kingston. Studio One Rude Boy features artists and songs about rude boys and rude boy culture from all periods of Studio One's history. The album features Ska, Rocksteady, DJs, Roots and Dub.The album features classic tracks from Jamaica's finest singers and groups such as The Wailers, John Holt, the Wailing Souls, Dennis Brown alongside super-rare tracks from artists such as Mr Foundation, Dudley Sibbley and The Soul Brothers all recorded under Clement 'Sir Coxsone' Dodd's supervision at the legendary recording studio and record label. All the eighteen tracks have been newly digitally re-mastered for this album and the album comes with full sleevenotes, photos and text making this another essential Studio One Reggae release for connoisseurs of Reggae and newcomers alike. 2006.