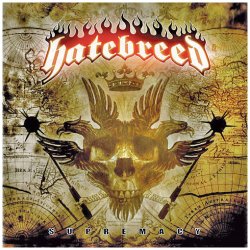 With three genre defining albums, 10 years of touring and a legion of devoted fans behind them, Hatebreed has returned with the strongest and most dynamic album of their career. Building on a history of intense and inspiring songs Supremacy brings the band to a new level with 13 songs that are sure to reinvigorate a stagnant scene as well as inspire a whole new generation of kids with a message of inclusion and empowerment. Hatebreed's visibility is at a peak coming off their 10 year anniversary tour, Jamey Jasta's position as the face of hard rock as the host of MTV2's Headbangers Ball and having the lead track and video ('To The Threshold') from Roadrunner's Headbangers Ball: The Revenge album. All of this has set the stage and built furious anticipation for Supremacy.