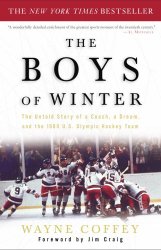 The Story of the Greatest Sports Moment of the Twentieth CenturyOnce upon a time, they taught us to believe. They were the 1980 U.S. Olympic hockey team, a blue-collar bunch led by an unconventional coach, and they engineered what Sports Illustrated called the greatest sports moment of the twentieth century. Their “Miracle on Ice” has become a national fairy tale, but the real Cinderella story is even more remarkable. Wayne Coffey casts a fresh eye on this seminal sports event, giving readers an ice-level view of the amateurs who took on a Russian hockey juggernaut at the height of the Cold War. He details the unusual chemistry of the Americans—formulated by their fiercely determined coach, Herb Brooks—and seamlessly weaves portraits of the boys with the fluid action of the game itself. Coffey also traces the paths of the players and coaches since their stunning victory, examining how the Olympic events affected their lives.Told with warmth and an uncanny eye for detail, The Boys of Winter is an intimate, perceptive portrayal of one Friday night in Lake Placid and the enduring power of the extraordinary.Also available as an eBook

Do you want ot get the The Boys of Winter: The Untold Story of a Coach, a Dream, and the 1980 U.S. Olympic Hockey Team?