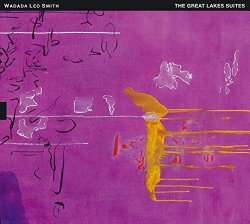 The Great Lakes Suites introduces us to composer and trumpeter Wadada Leo Smith's latest small ensemble: the Great Lakes Quartet. A true super group in creative music, it includes two legends in their own right, saxophonist/flutist Henry Threadgill and drummer Jack DeJohnette, with both of whom Smith first played in Chicago in the late 1960s during the early days of the Association for the Advancement of Creative Musicians (AACM). The quartet is completed by another master of his own instrument, bassist John Lindberg, who was born in Detroit, another city on the Great Lakes. For The Great Lakes Suites, Smith composed an extended new work for each of the five lakes that traditionally are considered to comprise the Great Lakes, and also added a sixth composition, Lake St. Clair, which is dedicated not only to that smaller lake in the same region wishing to be considered a Great Lake, but also to saxophonist Oliver Lake, undoubtedly another Great Lake.