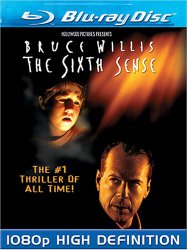 Blu-ray(TM) Hi-Def and enhanced audio bring new chilling suspense to acclaimed filmmaker M. Night Shyamalan's THE SIXTH SENSE, one of the greatest psychological thrillers of all time! When Dr. Malcolm Crowe (Hollywood superstar Bruce Willis), a distinguished child psychologist, meets Cole Sear (Haley Joel Osment), a frightened and confused eight-year-old, Dr. Crow is completely unprepared to learn what truly haunts young Cole. As the depth of Cole's incredible sixth sense is discovered, both Dr. Crowe and Cole are led into intense and mysterious encounters that will have unforgettable consequences. The suspense will keep you on the edge of your seat until the final truth is revealed in THE SIXTH SENSE -- now more spine-tingling than ever on Blu-ray High Definition!