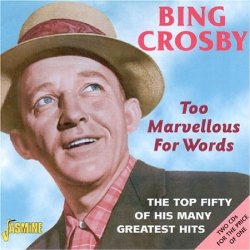 Ask a hundred or more devotees of Bing Crosby to compile a list of their fifty best recordings and you would have a hundred or more different ideas about what should be chosen from the many hundreds of songs he committed to disc. His twenty plus million sellers might serve as a basis on which to build the fifty, or perhaps some of the number he warbled to such good effect in the upwards of fifty movies in which he starred, there's plenty of scope there. What about all the other records he made through the years from 1931 onwards when he became established as a solo artiste? The type of song was no problem, he was adept at handling almost anything. There'd be many who would point to his expertise with a cowboy or country & western ditty, others who favour his Hawaiian interpretations, songs from the stage and screen and just the plain old sentimental ballads. There are songs for children (he knew plenty about those!), songs to make us laugh and songs to make us happy.

Three Wooden Crosses: The Inspirational Hits Of Randy Travis
The Lion The Beast The Beat
Ritual
Hairspray (Soundtrack to the Motion Picture)
Rising Tied
The Church Of Rock And Roll