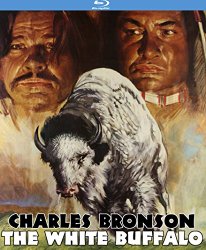 Two of the West's most legendary figures search for the demon buffalo that haunts them both! They called him Wild Bill Hickok (Charles Bronson, Breakheart Pass), the prince of pistoleers, a frontier adventurer and killer of men now, in his last years, he's in an old gunfighter plagued by fears and driven by a need to make peace with himself. The White Buffalo is his constant nightmare; he must find the fabled beast and destroy it... before it destroys him. He was Crazy Horse (Will Sampson, One Flew Over the Cuckoo's Nest), the greatest of all Sioux chiefs. A warrior of dignity and pride - now a father who searches for the legendary albino buffalo so that the spirit of his dead child can go to heaven and he will stop at nothing to obtain the sacred white pelt. J. Lee Thompson (The Guns of Navarone) directs this one-of-a-kind western that features a brilliant cast the includes Jack Warden (Billy Two Hats), Kim Novak (Picnic), Stuart Whitman (Shadows in an Empty Room), Slim Pickens (Blazing Saddles), John Carradine (The Sentinel) and western legend, Clint Walker (More Dead Than Alive).Special Features: Original Theatrical Trailer