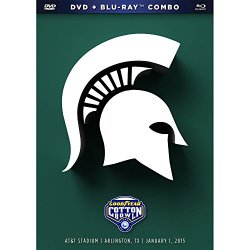 Saving its best for last, Michigan State scored three touchdowns in a thrilling final quarter to beat No. 5-ranked Baylor 42-41 in the Cotton Bowl classic at AT&T Stadium in Arlington, Texas, on New Year's Day. Following the game, Spartans' head coach Mark Dantonio said, It's just sort of crazy. I really probably can't put it into words. We just kept pace. We didn't panic. In directing Michigan State's miracle, last-ditch comeback drive, Connor Cook completed four-of-five passes for 138 yards. His heroics were made possible after Marcus Rush blocked a Baylor field goal attempt with 1:05 left in the game. On the final play of the game-winning touchdown drive, Keith Mumphery caught a 10-yard pass in the back of the end zone from the unflappable Cook. Michigan State fans were on the edge of their seats during the game's final seconds hoping it would be time to celebrate. Seventeen seconds later, they could and the party was on. The 2015 Cotton Bowl includes the commercial-free game broadcast as well as the trophy presentation. It is a great addition to any fan's collection!