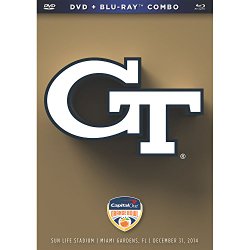 At the start of the 2014 college football season, experts entertained little hope that Georgia Tech would become a central figure in the college football bowl picture. But when the year was over, the Yellow Jackets (11-3) dominated the 7th-ranked Mississippi State Bulldogs, 49-34, to capture the Orange Bowl on New Year's Eve in Miami Gardens, Florida. Against the Bulldogs, Georgia Tech's often maligned option attack accounted for 452 yards on the ground including three touchdowns each by Synjyn Days and quarterback Justin Thomas. Thomas, who was chosen the game's outstanding player, was a difference maker. Rushing for 121 yards and passing for 125 more against a stout Mississippi State defense, Thomas proved he was the perfect quarterback to direct Coach Paul Johnson's intricate offense. The Yellow Jackets resounding victory against Mississippi State in front of 58,211 fans at the Orange Bowl made a convincing statement that Georgia Tech belonged among the college football elite. The 2015 Orange Bowl includes the commercial-free game broadcast as well as the trophy presentation. It is a great addition to any fan's collection!