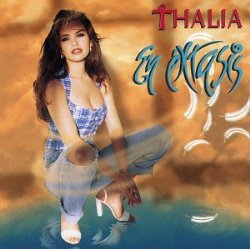 Thalia's first album on the EMI Latin label finds the Mexican singer and soap-opera starlet moving away from the disposable pop of her earlier discs in favor of richer, more diverse sounds. There are a few limp moments on En Extasis, but Thalia is clearly coming into her own as a singer. The switch is in large part thanks to producers Emilio Estefan Jr. and Kike Santander, who expertly disguise Thalia's shortcomings as a vocalist with slick production values. "Piel Morena," the album's first single and best track, is an intoxicating, sexy cumbia. Thalia shines on "Amándote," a dance track produced by A.B. Quintanilla III , and she even manages a sweet rendition of Juan Gabriel's "Gracias a Dios." The ballads "Quiero Hacerte el Amor" and "Lágrimas" (the latter cowritten by Thalia) also draw attention to unexpected shadings and nuances. --Joey Guerra