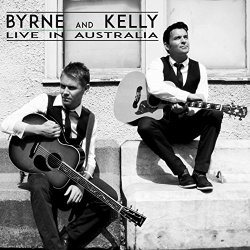 After three years of successfully touring America and most recently Australia and Canada - Neil Byrne and Ryan Kelly present their second album 'Byrne and Kelly - Live in Australia'. Recorded in 'The Vanguard' venue, in Sydney, Australia on June 18th and 19th 2014 to a lively audience as part of the debut Australian tour, which included shows in Perth and Adelaide too. The Irish Music Association of America awarded Neil & Ryan with 'Best Duo' in a Concert, Pub, Festival and 'Best New Album' in 2013 for 'Acoustically Irish'. In addition to going straight to the Billboard World Album Chart #1 position upon release in October 2013, 'Acoustically Irish' was an iTunes US, Canada and Australia World Album Chart #1, Amazon US World Album #1 and Celtic Album #1 and a CD Baby Global Chart #1. 'Thanks to all of our fans for your unbelievable support for us over the past few years. This album is for all who have been able to attend our live shows and those who haven't had the chance to do that yet - we hope this album helps you to re-live those memories or make new ones...' Ryan and Neil.