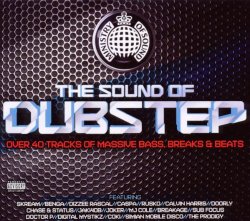 Ministry of Sound brings you the latest buzz genre to emerge from the underground club scene. Over the last couple of years Dubstep has risen to prominence with mass exposure across national radio, being championed by the likes of Annie Mac & Zane Lowe on Radio 1 as well as massive club nights surfacing all over the world. Having been the first to bring out a collection of Bassline as it hit it's peak, with both albums having combined sales of over ¼ million copies, the Sound of Dubstep is now the freshest sound in dance music and makes this an essential purchase for all people that like their raw bass. Following on from the epic Skream remix of La Roux's 'In for the Kill', a dubstep remix is a now standard for all the major music labels. Dubstep artists consistently appear at the sell out under 18's events 'Under the Radar' as well as prominently featuring at major festivals up and down the country. The Sound of Dubstep is the first TV album to bring together all the biggest tunes, allowing you to experience the low bass frequencies bought to you by the pioneers of the scene including Skream, Benga, Caspa, Rusko & Doorly. With massive remixes of the Prodigy, MJ Cole, Dizzee Rascal, Calvin Harris and loads more. This is the ultimate collection of over 40 classic and exclusive heavy hitting tracks that is destined cause some serious damage!