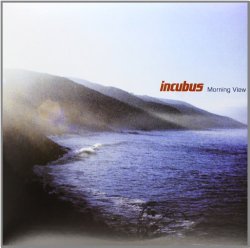 2001 release. Double LP is pressed on 180 gram vinyl. Incubus is ready to pave its own way in the modern rock scene. with the brooding and crunchy musical themes of Morning View, it's almost hard to imagine that the album was written and recorded in the relaxed atmosphere of a California beach house. Drummer Jose Pasillas offers tasty percussive coloring in the breakout single, "Wish You Were Here." the song's trippy verses set against its heavily strummed choruses fits the profile of push-and-pull dynamics that Incubus fans have come to expect. "11am" touches on regret and indecision with some neo-Eastern flavor and Mike Patton-inspired vocalizing by frontman Brandon Boyd. "Float" borrows from traditional Asian music and shows the band's near-fearless spirit of experimentation. Morning VIiew's most eccentric track is the crafted epic "Just a Phase," whose quirky time signature changes and adventurous arrangement show that Incubus has a great deal more to offer than strategically placed turntable scratches.

Do you want ot get the Morning View (Vinyl)?