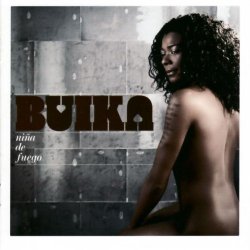 Buika unveils herself on the cover and bears all on her third album,Niña de Fuego. Buika does away with the costumes that usuallydecorate album covers, stripping away all but her feelings.When she moved to Madrid and recorded her first album, she showedthe never-ending possibility of her skills as a singer. With her secondalbum,Mi Niña Lola, produced by Javier Limón, she got thecredibility, the recognition, the awards, the performances, and theexciting reviews that left people breathless.Her career cannot be summarized in a sentence but when she opens hermouth you realize there is no singer like her.Buika now arrives with her third album, Niña de Fuego (Girlof Fire) again teaming up with producer Javier Limón. On this album,Buika returns to the Spanish copla, performs for the first time severalranchera songs, and also some new songs composed by herself and JavierLimón. The album is full of songs about love and longing affection.Buika sings of her personal experience in the lyrics that she and JavierLimón wrote and composed.

Do you want ot get the Nina de Fuego?