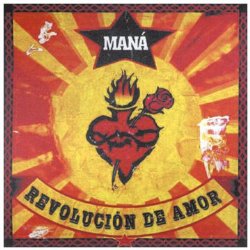 Mana has unquestionably become the biggest musical group in Latin Music history! Millions of albums sold worldwide, sold-out concert tours and multiple record awards are just some of the accomplishments achieved by one of the most popular bands in the World. Mana is now set to deliver a most anticipated release, Revolution De Amor. A production comprised of 12 new songs and the group's first studio album in almost five years. Produced by Fher (lead vocals) and Alex Gonzales (vocals and drums), Revolucion De Amor is a musical blend of the style and arrangements that Mana is very well known for, but also features other musical forms such as Funk and Afro/Cuban performances recorded by the group for the first time. Finalizing the completion of this International globe of music, two musical legends collaborate and join Mana on Revolucion De Amor, Carlos Santana and Ruben Blades.