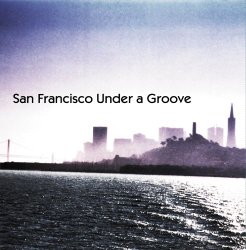 San Francisco Under a Groove is the second installment in the Under a Groove series. The series uncovers new electronica from important locations. The concept was created after a trip to France in 2001. There we came across some new French artists who fused electronica with funk and jazz. The resulting album, Paris Under a Groove received some critical buzz. So, we decided next to begin a San Francisco project, and in the process found some great talent. The SF sound has a more mellow side compared with New York and Chicago. In capturing that vibe, the album, focuses in on a funk/jazz electronica sound, deep basslines and sultry vocals. Perfect for kicking off any cocktail hour. The album's back side includes soulful breakbeat and deep house tracks played in Soma clubs. Featuring tracks from Miguel Migs and Movido featuring Lisa Shaw, Loveslap's deep house remix of Goapele's hit track Closer, and introducing, Andre Castano, Superbacana, Irina Mikhailova & Mr Untel, Karmacoda, Triangle Orchestra, Will Felt, and Tetris. Plus Maximillian's unreleased deep house track, Spontaneous Love, featuring Glide Memorial's Rev. Cecil Williams. 74 minutes total time.

Do you want ot get the San Francisco Under a Groove, Vol. 1?