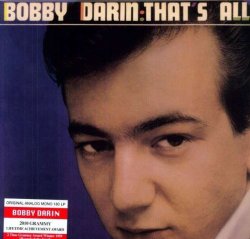 Bobby Darin's sophomore album released in 1959 contains two of his biggest hits in Mack the Knife and Beyond the Sea, with the songs being forever linked with him since then. That's All won Bobby the Grammy award for best new singer and record of the year. Tracks include: It Ain't Necessarily So, I'll Remember April, That's the Way Love Is. The recording sessions were produced by Ahmet & Nesuhi Ertegun and Jerry Wexler, and engineered by the legendary Tom Dowd. Acoustech's Kevin Gray, has meticulously remastered this LP from the original analog mono tape. 180-gram MONO recording.

Do you want ot get the That’s All?