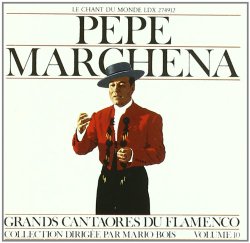 Praised by Falla for having a voice that was ''pure poetry to the ear'', Pepe Marchena was a great star who played in cabaret theatre and cinema, and gave lectures. Marchena was Andalusian in every fiber of his being, often singing the praises of his country. He was born in 1903 in the village of Marchena, where today there is a statue of him erected by public subscription, and throughout the first part of his career he went under the name of ''El Nino de Marchena''. After he made his debut in Madrid in 1921, he was in constant demand for ''flamenco shows'' and for galas (in which he appeared with legendary figures such as Chacon, his teacher, and Nina de los Peines), before settling into the theatre and cinema, and recording albums. At that point, he was often accompanied by a guitarist of genius, Ramon Montoya. Marchena toured throughout Spain, South America (with Carmen Amaya), Morocco, and even Pakistan. This reissue pays tribute to the voice of this ''modern trouvere'' (Falla).

Do you want ot get the Great Masters of Flamenco Vol.10?