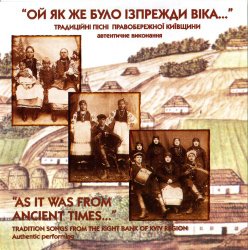 This CD represents music folklore from the right bank Kyiv region. Scientists call this land the transition area since it boarded with two huge habitats- the forest and the forest-steppe ones. In the music folklore we could find traits that was formed under the influence of Polissya, Podillya and Podniprovshchina customs and traditions. Unlike left bank Kyiv region whose ethnic development suffered from constant interruptions right bank's areals were mastered by our ancestors-farmers since extreme antiquity. Obviously that was the reason why they preserve in their memory the most ancient folklore's layer- the ritual calendar folklore that has almost died away nowadays. What a surprise it was to record in Kyiv region a carol about creation of the Universe that reflects the cosmological ideas of our forefathers. Formerly this kind of carols could be came across only in Western Ukraine. I was deeply impressed with the story of country women from Komarivka that until the last decade in Makary (the name of a village part) on Christmas day (21 of January) the ritual to tresh a sheaf was performed. Later at night women and men came all together to a one place and chose the bravest women among them. Then they tied her round with rye and the whole company went to visit every neighbor. Entering the house they sang the carol (36) that was being sang for two weeks holyday weeks and after that they thrashed host's sheaf. When the ritual was over the host made a record of the carol on ceiling board (just painted a cross there) - it symbolized the end of Christmas festive. Women from village Gruzke managed to retain till our time the song that was used by young girls to bewitch lads (20). During the summer expedition in 1995 I was lucky to be present at the wedding in village Luka where I witnessed the ritual veiling the bride women took her garland down and veiled her head with a kerchief that meant that the girl has turned into a woman.

Do you want ot get the Treasures of Ukrainian Music. Traditional Folk Songs of the Right-bank of Kyiv Region?